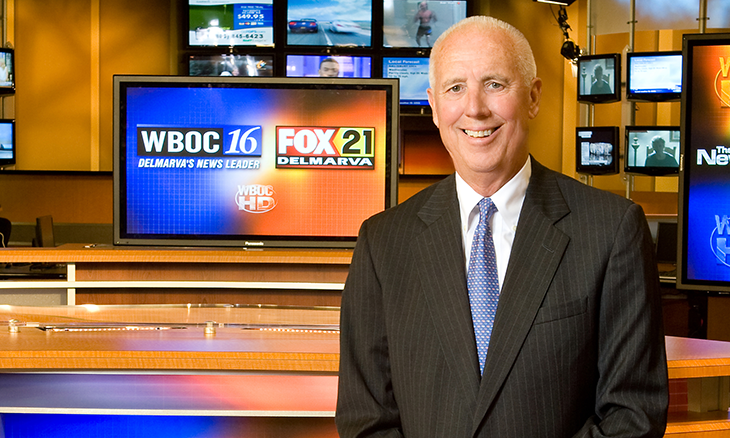 Giving goes beyond the building

Bayhealth Foundation
It was a typical morning for one of Sussex County’s media pioneers, Tom Draper. By 10 a.m. he had already finished a 10-mile bicycle ride and arrived at his office in Milton to work on a few projects.

“I like riding my bike in the country. I live out in the country,” he says. Every year Draper takes part in a 51-mile bicycle ride, yet he is very modest about his fitness capabilities. He says he doesn’t ride fast; his goal is just to finish the race.

Draper was wearing a blazer that he purchased in London the same year he graduated from high school in the 1960s. “I weigh the same as I did back then,” he laughs.

Draper graduated from Brown University (1964) where he was an All-American and All-Ivy League lacrosse player. His commitment to healthy living remains an important part of his daily routine.

While Tom Draper spent some time away from home to pursue higher education, his roots run deep in Sussex County. He can trace his family back to Alexander Draper, who landed on the Eastern Shore of Virginia in 1658 and, in 1677, settled in Sussex County on the shores of Cedar Creek.

Tom Draper grew up in Milford and raised his family near the hospital in Sussex County. Their family home was within walking distance of Milford Memorial Hospital. All of his children were born there, yet he says that is not what inspired him to make a contribution on behalf of his family to the Campaign for Bayhealth — Phase III in support of the new health campus project. For Tom, contributing to the campaign was a way to not only celebrate his family’s continued presence in Sussex County, but also to invest in the community that he hopes his grandchildren will come to know and love as much as he does.

“I believe in Bayhealth’s vision for the southern Delaware community,” said Tom. “The health campus project will change the course of Milford to some extent. The brand-new building will help with physician and employee recruitment, it will boost employment opportunities in the area, and it will also attract top healthcare organizations, such as Nemours Children’s Health System, to lower Delaware. That impact will be felt throughout more than just Milford.”

While this is the Draper family’s first charitable gift to a healthcare organization, Tom is not a stranger to philanthropy. He and his family strongly believe in giving back to the community. They care deeply about pitching in to help address today’s pressing community needs. The Drapers have been bighearted supporters of numerous regional causes, including Delmarva Christian High School, Sussex Academy, and The Jefferson School.

“Tom and his family are among the most generous supporters of our health campus project,” said President of Bayhealth Foundation Dr. Lindsay Rhodenbaugh. “The fact that this endeavor has elicited Tom’s first major philanthropic contribution to any healthcare institution speaks volumes about his belief in what the health campus will bring to southern Delaware and the Draper family’s deep level of care for the citizens of our region.”

Tom’s daughter and son-in-law, Mariah and Sam Calagione, are also donors in their own right to the health campus project through their business Dogfish Head Brewery. Their support was further demonstrated through a partnership that resulted in Dogfish Head providing some of their product at a gathering last summer and hosting an event at the Milton brewery in October.

Tom is enthusiastic when he talks about the future of healthcare in southern Delaware. “The people of Milford and the surrounding areas are saying, ‘Yes, Bayhealth, we believe in this project, we buy into your vision, here is my donation to symbolize that we are with you. We want to help you grow in this town.’ That’s what we believe the campaign is all about. It’s not about building a building.”

Mr. Draper is quite experienced in growing a business. In 1966, he began to build what would become the most dominant television media group on the lower Delmarva Peninsula and one of the more successful small-market media groups in the United States, WBOCTV. Together with its sister station Fox21, WBOC Radio 102.5, and multiple digital platforms, WBOC-TV provides multiple weekday newscasts per day.

In a small town like Milford, there is a strong sense of community and belonging. The Drapers are just one of the many families that have made it their mission to improve the quality of life for people living in southern Delaware. Community support remains vital as Bayhealth prepares for the next 100 years of care in Sussex County.

Visit ImagineDE.com to learn more about Bayhealth’s new health campus project. Call 302-744-7015 to find out how you can be involved by supporting the Bayhealth Foundation.