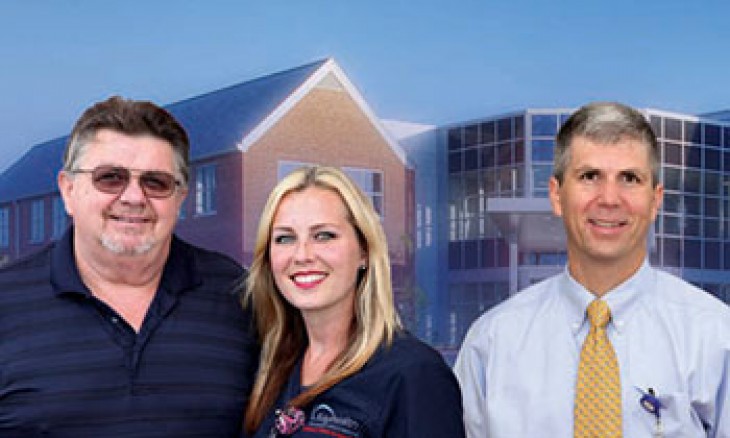 Clayton resident Eddie Walton works for the Delaware Emergency Management Agency (DEMA) at the State of Delaware. In his job, he prepares for emergencies and critical situations. Walton and his wife Arlene have been married 38 years and have lived in Delaware all their lives.

On Friday, June 26, Walton had the day off. In the morning, he left his home in Clayton to pick up equipment in Middletown. Upon returning, he ate lunch with Arlene, and then he headed to his garage.

“All at once, I had heaviness in my chest, I got this pain in my left arm, and I started perspiring, bad.” He ran to the house and yelled to his wife, “Arlene, I gotta go. Something’s wrong.” When Arlene turned to grab her purse, she saw the couple’s only vehicle leaving the driveway. To her dismay, Walton had driven himself to find emergency care.

When Walton arrived at the Bayhealth Emergency Center in Smyrna, his face was gray. Emergency Nurse Jamie Wells, RN, saw him arrive and met him in the lobby. Wells and the team got Walton into an exam room. Walton complained the room was hot, and he was dripping with sweat. The team brought in a fan to cool him off.

Walton’s primary care physician, John Fink, MD, of Bayhealth Family Medicine, has an office in the same building. “After [Walton] arrived, Nurse Manager Kim Ford, RN, BSN, CRN, SANE, called to obtain an old EKG,” said Dr. Fink. “Since I was upstairs, I was able to come to see [Walton], provide background to his nursing team, and a familiar face to him.”

The new EKG was inconclusive, but to Wells, Walton’s symptoms looked like a heart attack. “I knew he had limited time,” said Wells. Walton needed emergency stabilization, and Wells arranged for rapid transport to Bayhealth Kent General. In the ambulance, Wells called the frantic Arlene and told her what happened.

At the Emergency Department at Bayhealth Kent General, Walton had a second EKG and was sent to the catheterization laboratory, or cath lab. There, Interventional Cardiologist Khaled Eljazzar, MD, found that Walton’s left anterior descending artery — often called “the widowmaker” — was almost 100 percent blocked. “A trickle of blood was getting through, which is why my heart didn’t shut down completely,” said Walton. “That trickle saved his life,” said Dr. Eljazzar, “Here in the cath lab, we say, ‘Time is life.’ The more time passes, the more heart muscle dies.”

Dr. Eljazzar inserted a catheter through a needle in Walton’s groin area. He snaked the catheter over the heart and injected dye to view the area of the blockage. Then he cleared Walton’s blockage and placed a stent. “My pain went from about an eight to nearly nothing at all,” said Walton.

After the procedure, Walton was admitted to the hospital. Three days later, he was told he could go home. “I was in on Friday and out on Sunday for a heart attack,” he said. “It was pretty miraculous.”

The following week, Walton went to see Dr. Fink and crossed paths with Wells. Overcome with joy, Wells hugged Walton right there in the lobby. “I could barely believe he was the same person,” she said.

Walton admits that he never should have driven himself to the Emergency Center. “I’ll never live that down,” he said. “I should have called 9-1-1.”

Children get bumps and bruises, but when serious injuries take place and you wind up in Bayhealth Kent General’s Emergency Department, our dedicated team of Pediatric Hospitalists are at the ready. These physicians are board certified and specialty trained to care for the youngest hospital patients. Pediatric hospitalists are on-site 24 hours a day, 7 days a week to care for your child.

Our extensive team of neonatologists, pediatricians, and specialized nursing staff are trained to accommodate the distinctive needs of children. We are committed to providing excellent patient care, treating common diagnoses or the most complex. You want what is best for you child, and so do we.

Now, local emergency pediatric care is in your neighborhood.