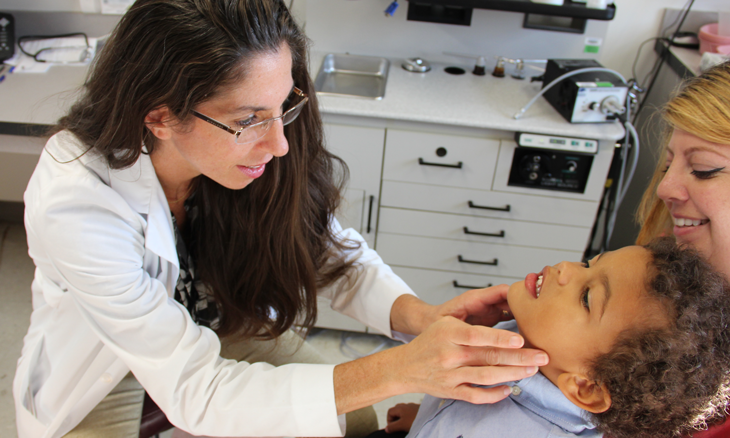 A not so scary lump on the neck

A mysterious lump appeared on the front of one-year-old Owen Warren’s neck in just a matter of hours. His mom, Amanda Warren, described it as sudden and terrifying. She assumed the worst and turned to Owen’s pediatrician for answers. That’s when Owen was referred to otolaryngologist Catherine Wright, MD, with Bayhealth ENT (ear, nose, and throat).

Following testing that involved blood work and a CT scan, Dr. Wright discovered a second lump. Both were thyroglossal duct cysts — they were neither cancerous nor immediately threatening Owen’s health. In fact, many children have these cysts that are present at birth, but don’t appear until at least age two or when the child has an upper respiratory infection. Thyroglossal duct cysts are filled with fluid and are formed from leftover tissue in the thyroid gland.

The symptoms of a thyroglossal duct cyst vary, but the most common include a small, soft lump in the center front of the neck; difficulty swallowing or breathing; and tenderness or swelling of the lump, if infected.

Because Owen was just a year old when the cysts were discovered, Dr. Wright suggested the family wait a year before scheduling surgery to remove the growths. It would require general anesthesia and an overnight stay in the hospital. “The lump never bothered Owen,” said Warren. “In fact, he never noticed it was there. I had confidence in Dr. Wright and her recommendation to wait to remove the cysts.”

Twelve months seemed to rush by quickly and surgery was rapidly approaching. Warren described the nights prior to Owen’s surgery as some of the longest of her life.

The morning of surgery, Warren found comfort in the team who cared for Owen in Pre-Op at Bayhealth Kent General. “Dr. Wright told us that the surgery would last up to two hours,” said Warren. “The longest part of the entire experience was sitting and waiting. But someone came and gave me an update every 30 minutes.”

After a successful surgery, Owen and his mother stayed overnight in the Pediatric Department at Kent General. The department is home to certified pediatric nurses who are trained in the unique and changing physical and psychosocial needs of children during illness. Board-certified pediatric hospitalists with Christiana Care Health System care exclusively for pediatric patients in the department.

“The nurses and staff showed compassion toward me and Owen,” said Warren. “They made sure I wasn’t stressed, or it would show on Owen and affect his recovery.” Dr. Wright checked on Owen a couple of times during his short stay and was pleased with how well he did.

Warren said the surgery never seemed to bother Owen. He now has a small scar on his neck that will continue to fade as he grows older. Staying close to their Harrington, Delaware home was important to Warren. “Owen has an older sister and family who all wanted to see him.

Staying at Kent General made it easy for them to visit. His dad was even able to come after working a full day and attending his college classes.”

“The entire process went so smoothly,” said Warren. “Dr. Wright answered all of my questions, she was knowledgeable, and I never once worried about her abilities.” According to mom, Owen is back to being his goofy, fun-loving self.

Dr. Wright sees adult and pediatric patients at Bayhealth ENT in Dover and Milford alongside fellow otolaryngologist Stephen Cooper, MD. Dr. Wright earned her medical degree from the University of Nebraska Medical Center (UNMC) in Omaha. She completed an internship in surgery and her residency and chief residency programs in head and neck surgery at UNMC.

To find a Bayhealth otolaryngologist to fit your family’s needs, call 1-866-Bay-Docs to learn about providers in your area.