Home / Community Health & Wellness / Patient Stories / Getting out of the grind 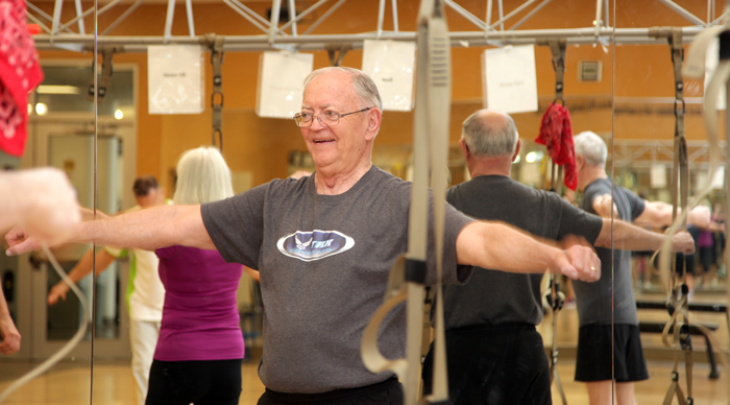 Getting out of the grind

Retired United States Air Force Colonel Richard Harper — former pilot and Base Commander at Dover Air Force Base — has been in peak physical condition all his life. He’s 75 years young, and he and his wife Dottie (married 45 years) have worked to maintain their healthy lifestyles long into retirement.

Col. Harper takes great pride in his physique. He participates in the base’s TRX suspension training program and rides the stationary bike three times per week. He loves being outside and enjoys participating in Delaware’s annual Amish Bike Tour.

Col. Harper had just one problem. His left knee — which he referred to up until that point as “the good one” — was no longer flexing the way it should. He felt unbalanced. “At one point, I put my foot down the wrong way walking down the stairs and I tore my meniscus,” he said. He was in a lot of pain.

“It was just grinding bone on bone,” said Col. Harper. He couldn’t run for any distance or ride his stationary bike, major parts of his routine. “It’s not like me to skip exercise.”

For several months, Dr. Tooze treated Col. Harper using a conservative approach that included arthroscopic surgery, therapy, medications, and injections. Dr. Tooze drained fluid from Col. Harper’s knee and removed a piece of cartilage that had broken off and was irritating the surrounding tissue.

During the summer of 2015, Col. Harper and Dottie took their daughter, son-in-law, and grandson to Disney World in Florida. To his chagrin, Col. Harper had to use an electric scooter to keep up with his family. Still, he made the best of it.

Prior to his knee replacement surgery, Dr. Tooze arranged for Col. Harper to have a new set of X-ray and MRI images, which were sent to Visionaire manufacturer Smith & Nephew, Inc. Engineers used the images to prepare a customized knee replacement and three-dimensional cutting guides specifically for Col. Harper’s knee. Dr. Tooze worked with an expert from Smith & Nephew to requisition, design, produce, and deliver Col. Harper’s new knee and surgical guides.

Dr. Tooze loves the Visionaire knee replacement. “It’s nice because it’s personalized,” said Dr. Tooze, who will complete his 500th Visionaire procedure this spring. “And there’s less trauma to the patient’s bones, usually less bleeding, less time in the operating room, and less time under anesthesia.” Altogether, Dr. Tooze has performed more than 2,500 total joint replacements. “I get good feedback from the patients and even hear from the visiting nurses and physical therapists about good recoveries,” he said.

After recovering, Col. Harper felt an immediate difference. “Twenty minutes after I left the recovery room, I was up and walking around,” he said. “I moved around a lot during those first two days, and they sent me home on day three.” After leaving the hospital, he said, “I remember coming down the stairs at home. When I put my foot on the top step, the knee felt stable and pain free! I stopped and thought, ‘I’m going to relish this moment forever!’”

Col. Harper received two weeks of physical therapy at home, and then went to outpatient therapy for another eight weeks. His flexibility began to return, and the pain subsided. Col. Harper knows his work isn’t done. “I know I’ve got to keep working on my flexibility,” he said. He continues to follow up with Dr. Tooze to ensure his knee is performing to its best potential.

“Recovery from a knee replacement is a 50/50 collaboration between the patient and the surgeon,” said Dr. Tooze. “It’s hard work getting back your knee motion, strength, and balance.”

Col. Harper continues to keep precise records of his range of motion. He’s back to his routine, riding the stationary bike and participating in TRX training at the base gym, a challenging and energizing workout.

Col. Harper’s outlook is overwhelmingly positive. “I’m able to make progress with this new knee,” he said. “I’m not being held back by anything anymore.”

Visit bayhealth.org/ortho to learn more about Bayhealth’s Division of Orthopaedics.