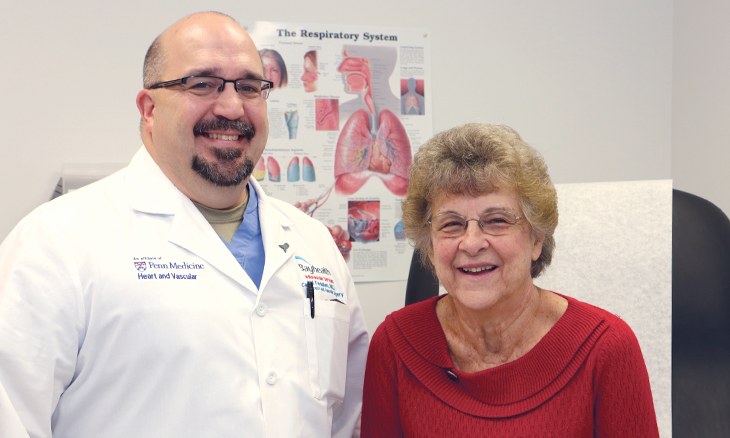 Kicking cancer with a robot

When Greenwood resident Beatrice Stutzman celebrated her 74th birthday on Dec. 1, she had a lot to be grateful for. Along with a happy and healthy family she had her health, which only a few months earlier appeared to be in trouble.

Roughly two years ago, Stutzman suffered from a nagging cough; however, she wasn’t terribly concerned about it. That is until a cousin announced that an annoying cough led to his cancer diagnosis. “My cousin had stage four lung cancer and told me I better go to the doctor,” Stutzman said. That’s exactly what she did. When her primary care physician exhausted all efforts and couldn’t find anything definitive, Stutzman was referred to a pulmonologist and was eventually diagnosed with lung cancer. “Hearing the word cancer is devastating, no matter how positive a person is,” Stutzman said. “It almost makes you feel violated.”

The next step in her cancer battle was a minimally invasive robotic procedure with Bayhealth Thoracic Surgeon Paul Fedalen, MD. Stutzman was thrilled to be a candidate for the procedure, which uses the da Vinci Robotic Surgery System. During the procedure on Oct. 4, Dr. Fedalen performed a lobectomy by going through the side of Stutzman’s chest. Using cameras and the da Vinci system, Dr. Fedalen removed the lobe of the lung and the lymph nodes. In the past, Dr. Fedalen would’ve had to remove the lobe via a thoracotomy in which the rib is cracked; thanks to the minimally invasive procedure, Stutzman spent just a few days in the CV/SICU at Bayhealth Kent General and then continued her recovery at home.

While Dr. Fedalen tries to use the robotic surgery with all of his patients, what made Stutzman an ideal candidate was the fact she was in great shape overall. Knowing he’s helped a patient beat cancer means everything. “This is why I do this. This is why the da Vinci Robotic Surgery System was developed — specifically for cases such as this,” Dr. Fedalen said. “The old-fashioned procedure would’ve meant a cracked rib for the patient and, thanks to this procedure, we can avoid that.”

Stutzman is grateful for the work of Dr. Fedalen and his staff, noting he quickly put her at ease when initially explaining the procedure to her. “He talked to me as if I was the only person in the world he needed to see all day,” Stutzman said. “He saved my life. Because of him I get to be here, so I’m here to say thank you. I had lung cancer and now I don’t. You can’t imagine how grateful I am to have beaten cancer. I know God worked through Dr. Fedalen to perform the surgery.”