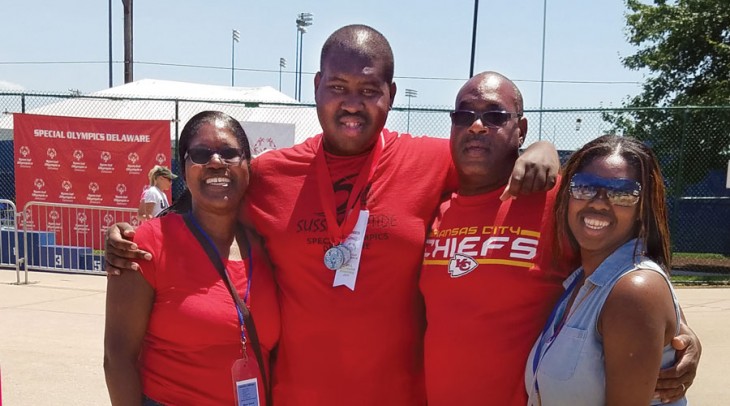 Specialized therapy for a decorated athlete

With a big warm smile, Kevin Williams exudes a positive attitude that is as large as his 6-foot, 2-inch frame. This Milford teen holds down two jobs, attends school, and is a medal-winning swimmer — backstroke and freestyle — in the Delaware Special Olympics.

This spring, however, it looked as though the silver medal he earned in the 2017 competition could have been jeopardized by injury just before the June games. Kevin, 19, had been training in the Howard T. Ennis School pool in Georgetown, swimming men’s 25-meter backstroke and 25- and 50-meter freestyle for the Sussex Riptide. Then in mid-March, his parents noticed Kevin was limping.

“Something was wrong, but we weren’t sure how it happened,” said Tomara Williams, his mother. His doctor checked to rule out the possibility of a fracture, and prescribed an ankle brace for Kevin, but the limp lingered. Naturally, his parents were concerned that their son was in pain, and that his swimming goals might be compromised by the injury. “It [the brace] didn’t help because he needed to be on his feet. It was his first injury, and he was referred to physical therapy,” his mother said.

Kevin is autistic. As a student at the Sussex Consortium in Lewes, he is able to communicate verbally to some extent, and from past experiences, is able to comprehend visiting a doctor or dentist. Going to a physical therapist would be a new challenge for him, and his parents were apprehensive. They were unsure whether the therapist would be able to understand, and appropriately respond to, their son’s special needs.

His parents had the option to select where their son would receive physical therapy. “We chose Bayhealth. It is close to home, so I thought, ‘We will start there,’” Mrs. Williams said.

As an active member of Autism Delaware, she has learned over the years how to advocate for her son to avoid as many negative situations as possible. To evaluate the facility and staff before Kevin started treatment, Mrs. Williams decided to visit Bayhealth Milford Memorial’s Outpatient Physical Therapy without her son to set up the first appointment.

Patient Account Specialist Tracey Welsh met privately with Mrs. Williams to better understand her concerns. Next, Welsh set up an appointment for Kevin to meet with Michael Scott Richards, DPT. Kevin’s mother said both she and her son were pleased with the initial meeting on April 20, and she was very positive about his initial evaluation.

Kevin enjoyed the experience and eagerly anticipated the next visit. Richards said his evaluation identified some instability and weaknesses in Kevin’s injured ankle and foot. “I was trying to improve his strength for functional activity. If he had pain, his kicking would be hindered, so the exercises were function-specific. I had him walking up and down stairs and walking on uneven surfaces,” Richards explained.

But there were other concerns once the therapy sessions started. Both Mrs. Williams and the physical therapists wondered how Kevin would express his tolerance of pain. “When Scott said he would watch Kevin’s body language, he won my confidence,” Mrs. Williams said. “He was very friendly, and he explained to Kevin what he was going to do with his foot. Kevin was fine with everything.”

Because Kevin is an extrovert and was a cooperative, friendly patient, he eventually became the star patient; everyone recognized and welcomed him.

Physical Therapy Assistant Kristy Ten used her professional skills to make each session unique. “I added some resistance and made it interactive and fun. I wanted some entertainment for him,” Ten said.

Within about a month, Kevin’s limp disappeared and his walking improved. He recovered enough to participate in swimming practice before the Special Olympics competitions.

In addition to swimming, Kevin was able to return to school, return to his job delivering mail for the Cape Henlopen School District, and attend camp. His mother said he wanted to receive additional physical therapy even after his May 18 discharge.

Mrs. Williams praised the personalized approach to Kevin’s treatment. “They let him dance. First, they gave him instructions, then they let him dance. He loves to dance, and he loves his music,” she said. “He got to know everyone on a first-name basis. Everyone treated him like a regular patient, and that made it easy for me. I tell other parents at Autism Delaware to go to Bayhealth Milford Memorial.”