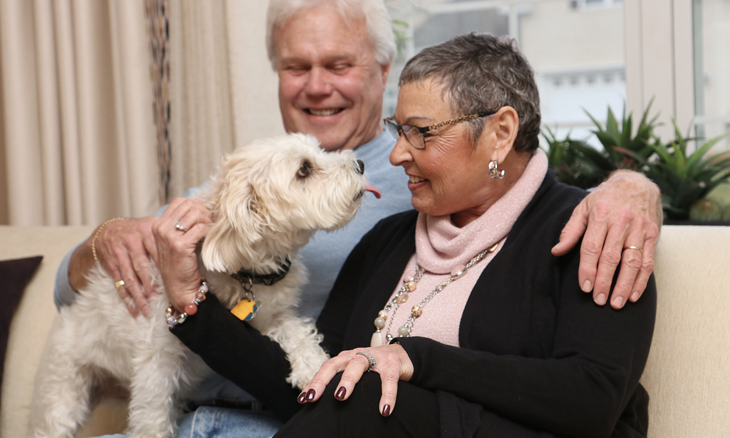 For the past decade, Vickie Hawkins has been creating greeting cards in the craft room of her Magnolia home. She says the activity allows her to express and share the love and gratitude that naturally fill her soul, enabling her to do something meaningful since the onset of degenerative joint disease in her neck and back many years ago. More recently, her hobby has helped her cope with another daunting medical condition.

In early April of last year, Hawkins started to experience persistent stomach pain and sudden onset vomiting. By early May, she began suffering numbness in her face, terrible aching in her teeth, and headaches. “Over the course of that time, I saw several of my doctors including my neurologist and primary care physician. Unfortunately, although they had me undergo a colonoscopy, an ultrasound, and other tests, nothing could determine what was causing my symptoms,” explained Hawkins.

On May 23, when her existing symptoms worsened and just a few days after attending an event with her tea club and not recalling most of it, Hawkins went to Bayhealth Hospital, Kent Campus. This time, she finally got the answers she’d been seeking.

An endoscopic evaluation found abnormal cells in her stomach, and she was diagnosed with Stage IV Double-Hit Lymphoma. Hawkins returned home with a treatment plan that included chemotherapy, and she and her husband Bill hoped and prayed for the best.

A few days later, Vickie’s health took a sudden and unexpected turn, and she was readmitted to the hospital. She had a cardiac arrest the following day, Memorial Day, and had to be resuscitated. Vickie was quickly transferred to the Intensive Care Unit, where she would remain in a mostly sedated state. “We were told the cancer had spread, and if she moved at all, she would die,” recalled Bill. “I was in shock.”

Despite the circumstances, Vickie’s hospital stay was better than the Hawkinses could’ve possibly imagined. “The nurses and other staff were unbelievable,” said Vickie. “I felt like they were my little angels.”

Bill added, “I couldn’t believe how the doctors, nurses, and other staff worked together. They had daily meetings that we could attend, and they always explained what was happening in layman’s terms so we could understand. Also, Vickie’s parents live in New York and were initially unhappy I didn’t have her transferred to a hospital in the city; they believed she would get the best care there. But they quickly realized she was right where she needed to be.”

“I have the most wonderful husband,” said Vickie. “When I came home, I still couldn’t walk or care for myself whatsoever. Bill helped me do everything. I’m very independent, so this was a very difficult part of my journey.”

Vickie’s cancer treatments continued after she was discharged from the hospital in mid-July, and her last day of chemotherapy was Sept. 21. She had a PET scan on Dec. 13, and it showed she was cancer-free — something the Hawkinses described as “simply miraculous.” Vickie says the only real bothersome symptom that remains is neuropathy in her fingers and toes, a side effect of the chemotherapy.

“In addition to what the doctors, nurses, and others in the hospital did to save my life, I never would’ve survived if it hadn’t been for Bill, the rest of my family and friends, and the outpouring of love and prayers from my community,” says Vickie. “It’s been a whole new life — a sort of rebirth. I don’t even look the same. I used to have lots of blonde hair, and I lost a lot of weight. I went into the hospital weighing 165 pounds and left weighing a mere 117. But it’s okay, because I’m embracing the new me and just thankful I’m still here.”

Vickie and Bill, who are originally from New Jersey, have been together for 31 years. They have four daughters and six grandchildren. The couple also expressed their gratitude for being able to say this experience has brought them closer together, and added that celebrating Vickie’s 61st birthday in October was a milestone like no other since she was starting a new year of life and was more alive than ever.

Visit Bayhealth.org/Cancer to learn more about cancer care at Bayhealth.

A couple of days before Vickie’s 61st birthday at the end of October 2017, the Hawkinses hosted a breakfast at the hospital to thank all the physicians and staff (too numerous to name) who helped save her life. They say the entire Hawkins family is forever grateful to the amazing team of professionals at Bayhealth, Kent Campus. “We feel that we have gained many new friends and family,” said Bill.