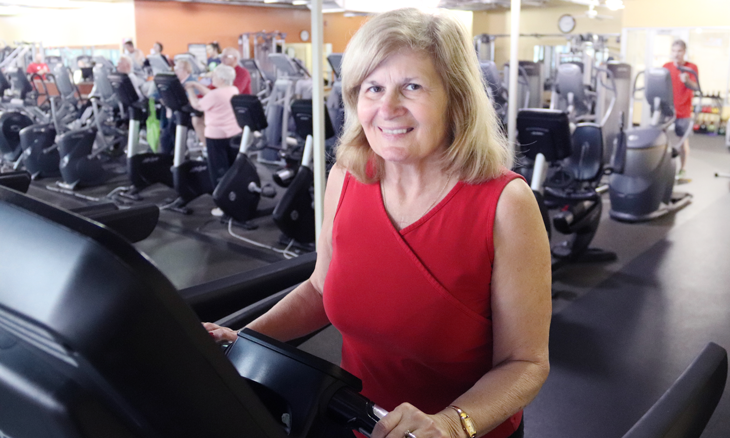 The long and short of a heart attack

Like many women, Rae Short cared for everyone around her and didn’t take the time to focus on herself. She was caretaker to her aging grandmother and mom, and also juggled the many responsibilities of being a wife and a mother to her own children. But since having a heart attack, she’s been making more “me time” and paying more attention to her health.

Short’s heart attack in February 2012 took her by surprise. It happened just days after the annual Go Red for Women Luncheon she helped organize as a volunteer for the American Heart Association. “Even during the ambulance ride, I was convinced I was having breathing issues, not a heart attack,” said Short.

A chronic cough plagued Short for years. She was working with her primary care physician and pulmonologist to rule out allergies and other breathing issues. Shortly thereafter, she had a heart attack. “I remember getting to the hospital and thinking I felt better and they would just send me home,” said Short. “It wasn’t until I spoke with the doctors that I realized I wasn’t going anywhere.” Just days later, Short had a triple-bypass heart surgery at Bayhealth Hospital, Kent Campus. She was in the hospital for more than a month recovering, and said it took at least another six before she finally felt like herself again.

Looking back now, she can see the warning signs. “I wasn’t as healthy as I should’ve been,” said Short. “I didn’t exercise and I’d skip meals. I also didn’t get enough sleep.” She admits not being very proactive about her own health because she was so concerned with everyone else.

Following her surgery, she enrolled in the Bayhealth Cardiac Rehabilitation program to regain strength. “I never exercised before, and I was nervous to get started,” she recalled. “I didn’t know what I should do or how I should feel.” While Short said the program was a big commitment, she saw it as the launching pad for transforming her health.

She’s now a regular at a local gym — going four days a week. Lean meats, fruits, and vegetables round out her diet. She stays away from fast food and caffeine, but does allow herself dessert every now and then. “I don’t ever want to be back in the hospital, so it’s great incentive for me to keep up with my new healthy lifestyle,” said Short. Now age 63, she says she feels healthier and more energized than ever before.

To maintain good heart health, Short sees Cardiologist Judith Rippert, MD. “She listens to me,” said Short. “I know I have her attention and I don’t ever feel like I’m being rushed. I trust her with my life.”

“Rae is a great example to all women to be mindful of their symptoms and not ignore any problems,” said Dr. Rippert. “Rae was a caretaker for others, but she needed to care for herself. She’s a great patient and she’s on the right path. It’s so important for women to visit their doctors and be aware of their risk factors. Women have to make themselves a priority.”

Short sees life differently now, saying she doesn’t have time for trivial things. “Now I focus only on what’s important and what I can do to make sure women know their risk factors,” said Short. “Caregivers don’t often think of themselves. But the truth is, you can’t help others if you aren’t here. Now more than ever, I let myself say ‘no’ if I can’t take on something. My ‘no’ gives someone else the opportunity to say ‘yes.’ Things don’t have to be perfect — life’s too short for that.”

Recognizing the warning signs of a heart attack

As with men, women’s most common heart attack symptom is chest pain or discomfort. But women are somewhat more likely than men to experience some of the other common symptoms, particularly shortness of breath, nausea/vomiting, and back or jaw pain.

If you have any of these signs, call 9-1-1 and get to a hospital right away.