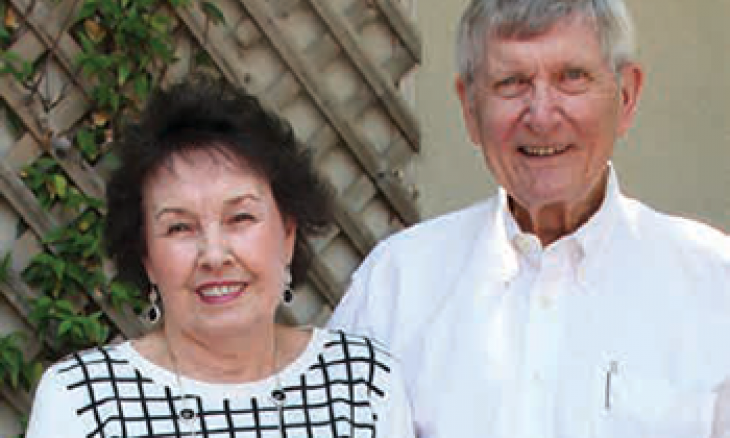 Andrew “Joe” Adkisson and his wife Barbara are warm, charismatic folks who have lived in Milford for nearly five decades. Joe is in his 80s and Barbara is in her 70s, but they share a vibrancy that will make you believe that age really is just a number.

Originally from Georgia, the couple describes their transition to Delaware as “accidental.” Joe had been working as a consultant for a Milford company that needed his help to expand. He expected to work on just one project for them, but his plans changed when they offered him a full-time position. Joe stayed on for another 30 years, while Barbara worked in the shops on Walnut Street.

Joe says his success in Milford began when he joined the local Rotary Club, where he met Raymond Masten, a prominent member of the Milford community. “If anyone was ever lucky coming to a new place, that was me,” said Joe, “Mr. Masten was heavily involved with Milford Memorial, and his wife Edith actually started the Milford Auxiliary.” Mr. Masten asked Joe to join him on the board of directors at Milford Memorial. Joe accepted and remained involved until the 1997 Bayhealth merger of Milford Memorial and Kent General.

Shortly thereafter, the Adkissons’ close family friend Paul Lakeman, president of the Bayhealth Foundation, recruited Joe to join the Foundation board. Joe served the Foundation faithfully for 18 years – even taking on the role of chair from 2000 to 2002 – stepping down last year. “It was an honor to serve in those positions,” said Joe.

In 2005, Joe and Barbara informed the Bayhealth Foundation that they would be including Bayhealth in their estate plans. They pledged a sizeable donation to Bayhealth to support the new health campus in Milford. “This health campus is a good move for Bayhealth,” said Joe. “I want to see this Milford facility finished – it’s what Milford needs.”

“I’ve been affiliated with the hospital a long time, and I’ve made a lot of good friends,” said Joe. “I love supporting Bayhealth and I always will.”