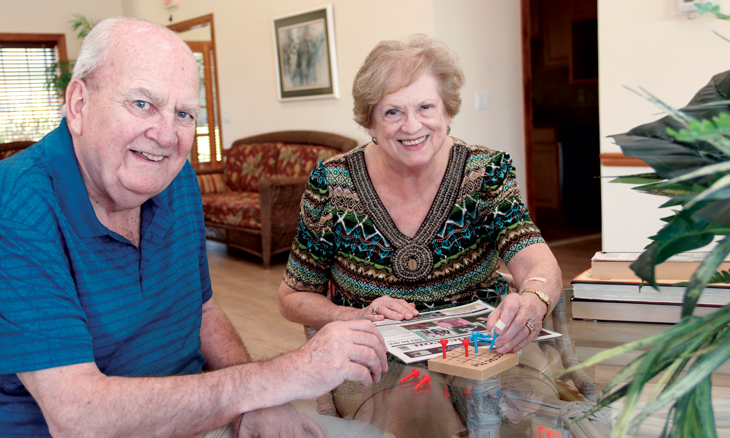 Walter Hepford was enjoying a weekend afternoon with his wife Sharon when sudden pain struck. It had them both so worried that they went straight to the Bayhealth Emergency and Trauma Department, Milford Memorial, where they found the peace of mind both were looking for.

The Hepfords have lived in Milford for the last 13 years. They relocated from suburban Philadelphia when they were looking for somewhere quiet and affordable to retire. Both Walter and Sharon are ingrained in the culture of community in Milford. They donate their time to the Farmers Market, Art League, and Downtown Milford, Inc., as well as other community initiatives. So when Walter was hit with pain he couldn’t ignore, the Hepfords knew exactly where to go.

Walter explained to the staff at the Emergency and Trauma Department at Bayhealth Milford Memorial that he was experiencing back and flank pain, which he described as unbearable and debilitating. Physician Assistant Dan Kemp, PA-C, took Walter’s vitals, and while they were all normal, he suspected something more was going on. “What I’m most proud of in this case is how quickly and smoothly things progressed,” said Kemp.

Walter had a prior history of kidney stones, but he told his medical team he didn’t think this pain was the same. An abdominal CT scan showed Walter was correct. He was suffering from gallstones this time. But there was also something else.

“When looking at CT scans, I was immediately concerned with the appearance of Mr. Hepford’s aorta. Ultimately, that reading determined he also had an aortic aneurysm,” said Kemp.

Kemp and his attending physician, Julianne Wysocki, DO, immediately contacted the vascular surgery team at Bayhealth Hospital, Kent Campus. Walter is now receiving care with Bayhealth Cardiothoracic Surgeon Daniel Marelli, MD. Additionally, Walter was also connected with a surgeon regarding his gallstones and the best course of treatment for that issue. He was sent home with medication for his pain and the peace of mind in knowing what was going on.

Walter and his wife made a lasting impression on Kemp. “I appreciated the opportunity to care for Mr. Hepford. He and his wife were aware and also understanding of all the steps we needed to take along the way for his care. Unfortunately, I don’t always have the luxury of seeing things go well, so this was a pleasure for me,” said Kemp.

Sharon was by Walter’s side the whole time. She recalls how hard it was to watch her husband in pain, but also the comfort she had knowing he was in good hands. “It was awful seeing how much pain Walter was in, and knowing I couldn’t fix it,” said Sharon. “But I felt so much better once we got to the emergency room, knowing that we were exactly where we needed to be. Everyone was so calm, but we could tell how much work they were doing behind the scenes to get answers for us. I was just so impressed with everyone.”

Walter echoes a similar sentiment about his time in the emergency department. “I wouldn’t have known about nor done anything about the gallstones or aneurysm if I hadn’t gone to the emergency department,” said Walter. “All the great people working there gave me the answers I needed and helped me find the path to figure everything out. For that, we’re eternally grateful.”

If you or a family member need a doctor for routine care, visit Bayhealth.org/Find-A-Doc or call 1-866-BAY-DOCS (229-3627) to be matched with a physician who meets your needs.

Where to go during a medical emergency

Call 911 if you are experiencing signs of heart attack or stroke. This allows emergency personnel to begin giving lifesaving care immediately, and also allows EMS to alert the hospital to be ready.

Go to the emergency department if you experience: