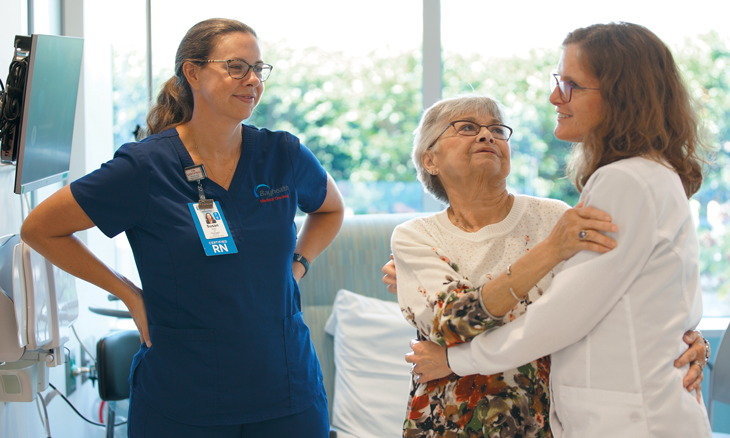 Oncology Nurse Finds Herself on the Other Side of Care

Milford resident Mary Van Bergen was an oncology nurse for 20 years. Less than three months into her retirement in early 2018, she found herself in the direct opposite role as an oncology patient.

Van Bergen started having lower back pain and noticed blood in her urine in late 2017. “I went to my primary care physician who thought I was having postmenopausal bleeding,” she said. When tests ruled that out, Van Bergen decided to schedule an appointment with Urologist Antoinette Ptak, MD, who did a bladder biopsy. The results showed she had bladder cancer.

Shortly after, Van Bergen began chemotherapy at Bayhealth Cancer Center, Milford Memorial. She says she decided to receive treatment at Bayhealth because of the cancer center’s proximity to her house and support systems. Van Bergen says her experience, especially with staff, soon assured her she made the right decision.

“From the registration staff to the volunteers to the nurses and the physicians, they all got to know me and call me by name,” said Van Bergen. “There’s a great sense of belonging and that everyone really cares about me. I feel like I’m part of a second family. For example, the nurses who work in the cancer center are outstanding and the social worker, Angela Turley, is always so helpful. Dr. Sawhney is also very kind and caring, but what impresses me most about him is his honesty. He also came to see me while I was getting my infusions.”

Van Bergen had three cycles of chemotherapy. After these cycles, the regimen needed to be changed due to disease progression, and immunotherapy was prescribed. Unfortunately, the immunotherapy wasn’t effective and Dr. Sawhney referred Van Bergen to Johns Hopkins. There was a specific clinical trial offered only at Johns Hopkins for Van Bergen’s cancer. She’s still receiving that treatment, which involves an oral drug, and also goes to Bayhealth Cancer Center, Sussex Campus for management of her cancer by local oncologists as well as supportive care. “It’s no secret nurses can be some of the worst patients, but I have no complaints. I was a little bit concerned at first because they were doing things differently than what I was used to. But I quickly realized that ‘different’ doesn’t mean ‘wrong.’ And when I got to Johns Hopkins, they also confirmed what I already knew — Dr. Sawhney and the rest of the team had treated my cancer the same way they would’ve recommended.”

Bayhealth Cancer Staff are honored to care for their patients. Go to Bayhealth.org/Cancer to watch a video about the gratitude and relationships with patients.