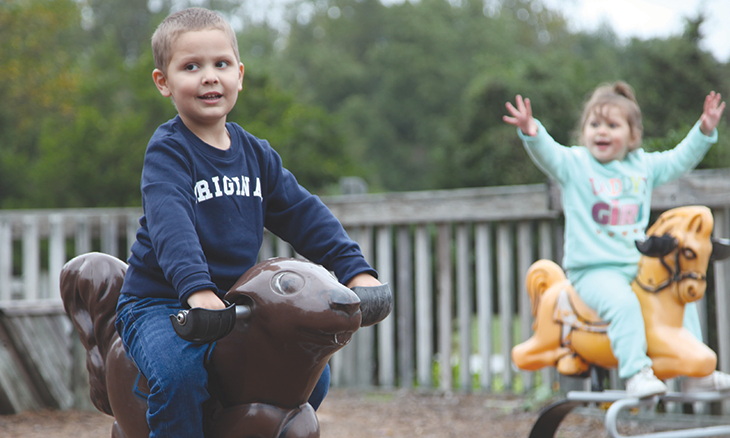 Constructing forts by using sheets, pillows, chairs, and anything else he can find, 4-year-old Omar Zerrad discovers fun in just about anything. This wasn’t always the case, as Omar has autism and struggled to express himself. After nearly two years of speech and language therapy at Bayhealth Outpatient Rehabilitation, Kent Campus, he’s found his voice — and his happiness.

When Omar was one year old, his family noticed he wasn’t talking frequently. He seemed to understand concepts, but couldn’t communicate effectively with others. A trip to Omar’s pediatrician led to a diagnosis — Omar is on the mild end of the autism spectrum.

With a diagnosis in hand, Omar began speech pathology therapy. “When Omar first started therapy, he couldn’t speak, or if he did, we couldn’t understand him,” said Leah Zerrad, Omar’s grandmother. “Now, it’s exciting for him. He’s happy, and every time he has therapy he wants to share what he did.”

“When he first started, Omar would cry and have tantrums to express himself,” said Speech Language Pathologist Arielle Allentoff, MS, CCC-SLP, who has worked with Omar since August 2016. “He also had trouble following directions.” Omar had delays in his expressive language — his ability to put thoughts into words — and receptive language — his ability to understand language.

Since beginning therapy, Omar has made tremendous strides. He now forms a variety of five- to seven-word sentences. And on his most recent standardized test of expressive and receptive vocabulary, Omar scored in the average range for his age. He’s also making progress answering questions and can follow more complex directions. “Omar is very smart,” said Zerrad. “We think he always knew his ABCs, counting, and coloring. Therapy has helped Omar build his confidence.”

Now Omar is working to understand one- and two-step directions with concepts like color, size, and spatial prepositions such as “from” and “to.” He’s making improvements with social skills, including learning how to greet familiar and unfamiliar people. Work continues at home to augment what is learned in speech pathology therapy.

Children get frustrated when they can’t properly express their thoughts, or if they have difficulty with speech. Speech language deficits can lead to behavior issues, bullying, and difficulty in answering questions, among other things. “We provide strategies that assist children in communicating their wants and needs, develop relationships with peers and adults, and achieve their highest potential in their educational setting,” Allentoff said.

“This experience has helped Omar build his confidence,” said Zerrad. “A lot of kids make mistakes and are worried about saying something wrong, but Arielle lets him know it’s OK even if he’s wrong. She’s very patient and is good at her job. This is clearly what she was born to do.”

The benefits of speech pathology therapy flow through every aspect of Omar’s life. His family has seen him flourish into a child who loves to run and jump, but who is tender and sweet at the same time. He even found a friend in his younger sister Amira, who at one time he didn’t even acknowledge. Now they’re “two peas in a pod,” as Zerrad described them. And next fall, Omar will conquer yet another goal — attending preschool.